The 1872 season was historical for an “outside” match being played at Nelson for the first time. Wellington club visited for a match arranged 14-a-side. The team arrived in Nelson on Monday morning, did some horse and trap sightseeing and retired to bed to recuperate and to face the events of the morrow. The morning, as the records say, “was anything but propitious for football”. Which meant that sunny Nelson had dropped its bundle; it was raining like the hammers. In fact, it was so good that the rival captains agreed to postpone the match until the next day. The Wellington men relaxed downed a pint or two of Harleys or Dodson’s best bitter, tucked into mountains of rare roast beef, topped off with plum pudding and washed down with more mugs of the best. With feet up and pipes out, they settled down to an afternoon of sheer delight.

But their dreams were disturbed when a deputation of Nelson players, with eyes streaming, spluttered their way through the pipes smoke and informed them that the rain had stopped and requested that the game proceed. The Nelson men explained that arrangements had been made for the banks, offices and shops to close in honour of the contest the game and if the game was not played today it would not be possible for many of their players to get the second holiday to play tomorrow. Good fellows as the Wellington men were, and despite the great disadvantage they had been placed in, they reluctantly agreed to play. The decision was not to the liking of one of the players, and the Northerners played one man short. The Nelson side, with 10 players from the Nelson Club (R. C. Tennent as Captain, H. E. P. Adams, E.F. Blundell, N.L. Grace, Rev. J. P. Kempthorne, C. J Munro,——. Morse, T. H. Nicholson, A. S. Otterson and John Warnock) and four from Nelson College, won by three goals to nil.

Reporting the match, “The Colonist” on Friday, June 14, said: “ the ground was, simply, in as bad a state as it could possibly be; what was not water was stiff mud, and the slightly higher portions were so greasy and slippery that running seem to be out of the question. But when the game began they did manage to run, and to some purpose, although it almost ended in a double roll in the mud… Kempthorne managed to run in with the ball behind the goal and thus obtain the first ‘try’ … Just at the end of the first hour another ‘touch down’ behind goal was made by Adams. The ball was being brought out 20 yards, and Tennent, by a splendid kick, drove the ball high over the goal rope, making it two goals for Nelson…. Blundell at last secured the ball, dodged and doubled through several opponents, and managed to give a fine dropkick and secure another goal for Nelson… Much good play was exhibited by both sides and all did their best to represent their party with honour and, although it was evident that Wellington was overmatched, the determination and pluck with which they played their game deserved the highest credit.” 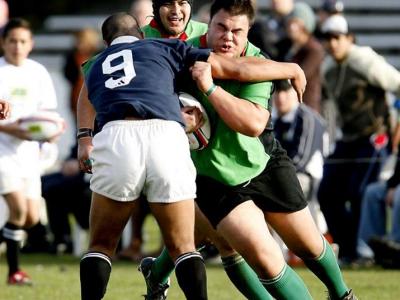