The second 1883 match finished sensationally. Returning the 1881 visit, a Whanganui XV (Whanganui and Upokongaro clubs combined) meet the Nelson combined clubs saw it which had done so well against the Marlborough combination three weeks earlier, but on the account of a dispute in regard to a point of law the Whanganui team on the field soon after half-time and the game was abandoned; that stage neither side had scored. Of interest as well is the fact that before the abandonment T. Coakley, of Whanganui was injured, his brother J. Coakley replacing him, thus emphasising that the replacing of players injured in a match, peculiar to New Zealand up to 1969, had been in effect longer than is generally thought.

In 1884 came Nelson’s first visit to Blenheim. In the Marlborough seem to the combined in Nelson clubs (eight of Nelson club, seven of Nelson College) failed to score, a Marlborough XV winning by one point (one try). To note the Nelson players is to recall that one of the backs was George Harper, then at Nelson College, who in 1893 became Nelson’s first All-Black. It was at this time that Nelson club adopted the colour of navy blue which has been its Signature up to the present day. The early sides played in white and later in red and white.

This season also saw the first use of a whistle to stop play in a game of rugby in New Zealand. Prior to this innovation, the sides were appealing loudly it was most exhausting and frustrating for the referee. Mr Atack of Canterbury, is credited with its introduction. The inspiration came to them they would be of great help to use a whistle to stop the game. The next time he refereed a game, he called the teams together and they agreed to play to the whistle. It was a big success both to the player and the referee, and was speedily adopted all over the country. 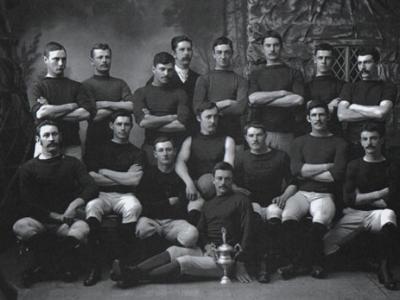