On the 12 May 1870, at the instigation of Charles Monro, they formally adopted the 1868 rules of Rugby and the new Gilbert oval ball as their preferred winter game.

From the newspaper report of the match given by the “Wellington Independent”, we learn that: “the goals were placed North and South and were about 160 yards apart”. The size of the field was a matter of convenience, the laws of the game at that time making no provision for the field’s dimensions, but saying that “football is played on a large little piece of ground, near either end of which is erected a goal, comprised of two upright posts of indefinite height, exceeding 11 feet, placed 18′ 6″ apart, with the crossbar ten feet from the ground.” A note says ” it is better to have the ground oblong than square.” It is interesting to recall that the measurements appertaining to the goalposts and crossbar of the 1870s are identical with today’s.

“ The football match between the Nelson and Wellington teams was played on the cricket ground yesterday before an assemblage of about 400 people amongst whom were many of the fair sex, who honoured the game with their presence in spite of the threatening weather, which happily repaid them by holding off till night. Sir George and Lady Bowen viewed the game from their carriage from nearly the commitment to the end. On arriving on the ground the players gave three hearty cheers for Lady Bowen. The Nelson side won the toss and chose the upper goal, which, on account of the fresh breeze that was blowing, was decidedly the most advantageous. The Nelsonians wore a very pretty uniform of red stockings and white jerseys which gave them a much better appearance than the Wellington team, who have not as yet fixed on any one colour. The first half hour the football was seldom more than 50 yards from the Wellington goal, the Nelson men we evidently determined to win, and played in splendid style, well together – in fact, a more scientific game then their opponents. When goals were changed, however, and the Wellington team had the wind – which had increased – in their favour, they showed up better, and some good individual play took place, resulting in a try, which in Captain Isherwood, by a splendid kick, nearly made a goal. This gave the Wellington men confidence, and their play manifestly improved. Nothing more was gained till the third half hour, when, though the Wellingtonian’s had the wind against them, they made a try and a goal, the only goal during the game. This try was made by a splendid run by Park over nearly the whole length of the field. The ball was then punted out, but fell short, luckily, however, one of the Wellington men succeeded in running the ball and touching down behind the goal, which gave the privilege of a fair kick at goal, when Captain Isherwood, by a good kick, this time made a goal. Directly afterwards time was called, and the last half an hour nothing was gained on either side, though some very good play took place. The Wellington men were heavier than the strangers, and had it all their own way in the ‘hack downs’, and also had the best of it running with the ball. There was much laughter on the bank at the tumbles, which were often very grotesque, but sometimes rather heavy. One young fellow on the Nelson side had to be carried off the field, but we are happy to hear he is alright today. The game was played throughout in a good spirited manner and no bad temper or ill feeling of any kind showed itself, which, in so rough a game, says a great deal of gentlemanly behaviour of the players. On the last half an hour being called,, the Wellingtonian men were winners by one goal.”

There was a break in the matches with Wellington in 1874, due to an apparent loss of interest in the game in Wellington, an intended trip to Nelson being abandoned. However, there was compensation when the visit of a British warship, H.M.S. “Blanche”, allowed for a match between the combined Nelson teams and a side from the warship to be played at the Botanical Reserve on September 12. It was staged 14 a side, and the local complement won by two goals to nil. “The Colonist” reported:

“Kick off shortly after three o’clock was followed by a terrific charge from the sailors, who came pluckily down on the landsmen, only to be sent back after the ball had been kept unpleasantly near their goal. Many hardfought scrimmages took place during the first 20 minutes near the touchline for possession of the ball which at last was sent by a neat kick from Speed over the bar, thus scoring a point to Nelson. Nothing daunted, the sailors continued the game, but want of practice now told on them, and in a short time Blundell had scored a second goal for the town. Play continued till five o’clock without further result. The sailors throughout played pluckily, and well, and in ‘following up’ gave our players a lesson well worthy of imitation. A great number of scrimmages took place, partly in consequence of the neat way the sailors had of stopping a player attempting to run. They had themselves peculiar ideas of the relative effects of concussion and rebound, for generally when a sailor charged an Landsman he would, if resisted, cannon off on his nearest neighbour, and with him come to ground. With the exception of an unpleasant blow on the head, received by an officer belonging to the ‘Blanche’, no accident occurred, and throughout the game was played with the utmost good temper”.

During the next decade programmes each season followed more or less the trend of the first five years. The club and Nelson College remained rivals, but combined frequently when an outside combination was to be met, whilst variety was provided by playing various combinations drawn from the club members, both with and without the assistance of the Collegians.

The 1875 outside matches were against Wellington clubs on July 5, and against Auckland Provincial clubs, on September 27, both at Nelson. In both games and the home team included players from the newly formed Picton club, the complements being recorded as Nelson and Picton clubs. The match with the Wellington side was 14-a-side, there being 13 of Nelson club and one from the Picton club.

At this time a points value was being used to decide a result. A goal still was regarded as the main object of the game, but the then humble try was beginning to come into its own, and the touchdown was being penalised by having half a point counted against a side compelled to “force down”. All goals were worth six points, and touchdowns (tries), two points. The match against the Auckland team was won by 6 1/2 points (13 force downs) to half a point.

Emulating the Aucklanders of the previous season, the Canterbury players organised a tour to return the visit of the North Islanders, taking in Nelson on the way home. The Cantabrians numbered 18 and were selected from Christchurch, Christ’s College, Kaiapoi, North Canterbury (Rangiora) and Temuka Clubs.

For the match against the combined Canterbury club’s, 11 from Nelson club and four from Nelson College were chosen, the selection been severely beaten, failing to score whilst the opposing side gained 30 ½ points. The value of tries was assessed at three points each, as were conversions, whilst other goals counted six points each. The half point penalty for force down also operated. The Canterbury points came from four tries, one coversion, one drop goal, one field goal and seven force downs. The field goal was abolished in 1906, yet frequently newspaper men gave the drop goal the designation of ‘field goal’.

The visiting side to Nelson in 1877 was from the far south, and styled Otago Clubs. The tour undertaken meant six matches, five being won, the other drawn; the win against Nelson combined clubs being by 46 points to nil. All accepting two of the Otago players (Dunedin Union) were from the Dunedin Club. The match at Nelson was played on August 20, and with tries counting 2 points, conversions 4 points and dropped goals 6 points, the Otago side notched nine tries, of which four were converted, and two drop goals. The game was contested 15 aside, the loss being the heaviest sustained by a Nelson side.

Wellington Combined Clubs crossed Cook Strait again in 1878, after a lapse of a season, to defeat Nelson combined clubs, a side which included only one collegian in the 15, by two tries and a conversion to nil. The Wellington XV was made up of players from Wellington and Wellington Athletic (founded in the previous year) clubs and Wellington College. There was a most unfortunate incident this season which did not help the progress of the code. During a game between Wellington and Athletic clubs in Wellington, a boy on the sideline was knocked over and had his leg broken by a player. “The New Zealander”, a Wellington paper of the day, had this to say:
It is becoming such a dangerous pastime that something should be done to stop it. There is nothing artistic, scientific or graceful in the game, and judging from the frequency of casualties connected with that, it can hardly be seen to be a healthy pursuit. Bull baiting and cock-fighting have more to commend them as a recreation than a rough and tumble hoodlum amusement which our youths seen to take so much delighted in.” There was some justification for the prejudice felt in some quarters that the game with its hacking and tripping, as allowed by the rules then in existence, could scarcely contribute to the players welfare, but with a change in the rules and the objectionable features removed, no more was heard of the bullbaiting, cockfighting, rough and tumble type of criticism.

By the end of the 1878 season, nine years from the humble beginning of the Nelson club, the game had speeded first through the North Island and then back down through the South Island, until now there were 78 established clubs throughout the country. Auckland had 13 clubs, Canterbury 11, Taranaki 9, Wellington 7, Waikato 4, South Canterbury 4, Otago 4, Southland 3, Ashburton County 3, Waiarapa 3, Marlborough 3, Manawatu2, Nelson 2, North Otago1, West Coast 1, Poverty Bay 1 and Hawke’s Bay 1. 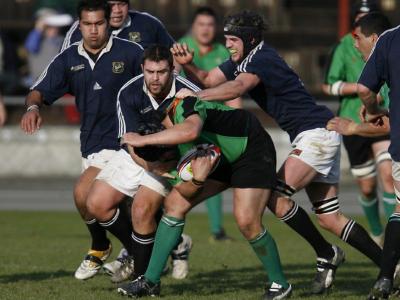