An event of much significance, and one which was to have a great impact on the lives of future generations of New Zealanders, occurred at Nelson on May 30, 1868. This was the formation of the Nelson Football Club, a society designed to become the first Rugby Football Club in New Zealand. The Club was the idea of Robert Collings Tennent, its advent being recorded in the “Nelson Examiner” of June 2, 1868, thus;-

“A football club has been formed in Nelson which we hope to see prosper, as we do all sports which promote healthy exercise.”

The Club’s first football was of the hybrid type, a mixture of Association football and Melbourne Rules football now called (Australian Rules Football). This football served the Club for two years. Then, early in 1870, Charles John Monro, a son of Sir David Monro, the speaker of the New Zealand House of Representatives, returned to Nelson after having been to school in England. Charles Monro had played rugby football whilst overseas, and suggested to the Club members that they try out that code. They did, and under Munro’s tuition, the new game proving to be to their liking and being adopted. Thus came New Zealand’s first rugby football club.

Nelson College had not taken up football seriously until Nelson Club was established, but it is on record that the College had staged a game – a picked eighteen against the rest of school – in the early 1860s, the contest being described in an issue of the “The Nelsonian” as resembling a famous match, Schoolhouse versus School, of “Tom Brown’s School days”. However, in 1868 football at the College again functioned, and was Nelson Club’s adoption of rugby rules in 1870, the collegians, too, chose the new game. With two opposing forces in being, it was natural that a match should be arranged. This historical match, the first interclub fixture played under rugby rules in New Zealand, the match was contested at the Botanical Reserve, Nelson, on Saturday, May 14, 1870. Nelson Club won by two goals to nil. An account of the game is given in “The Colonist” (Nelson) on Tuesday, May 17, 1870:

“FOOTBALL MATCH, THE COLLEGE VS TOWN”
An enthusiastic football player sends us the following account of the game: The toss for the ‘kick off’ being won by the college, the respective sides are placed by the captains. First the ‘kick off’ with the fast runners in attendance to follow up the ball; next a few to back them up, the ‘long kicks’ in the rear, and then the ’goal minders’. The other side stand well back to catch the ball, or long kick, to get it back past the ‘kick off’, with a few to charge the foremost of their opponents. And now, what was comparative silence and activity is suddenly converted into a rushing, noisy, shouting crew, and as the ball was kicked off the game commences in earnest. Almost as soon as the ball is amongst the Town players, the College have followed up, when a kick sends it over their heads again, and then it is seen in one place, and then in another, the whole field in pursuit. Now some player runs with that, and a general scrimmage ensues; it is all shove, pull, rush and roll about in a confused mass till ‘down’ is cried and away the ball goes again till perchance it gets in touch or caught. At first the College had it all its own way, and seemed intent on rushing the goal before the Town players shook themselves together; the ball was repeatedly charged close to the goal but was always got rid of safely.

Now the Town side began to play better, and by taking advantage of a chance, runs right down to the College goal, and the ball is ‘touched down’ behind the goal, and when kicked out before the college can charge him, Drew has placed a splendid goal, after a long and obstinately contested gain. After a short respite the goals are changed and the game resumed. Again the silence is broken with cries of ‘off side’, ‘touch it down’, etc, again the whole field seems in a rapid move, in first one and then another direction, or engaged in a scrimmage, or a long run, or waiting eagerly for the ball to be thrown in from ‘touch’, while some unfortunate may be seen hopping temporarily to the rear to repair damages…. presently the ball is kicked through the College goal by Clark, and so the game terminates in favour of the Town Club”

The fact that the teams fielded eighteen-a-side is in keeping with some of the formations of the early days; it must be remembered that the number of players on a side was a matter of agreement between the captains.

Further history was made when a Nelson Club selection journeyed to the North Island for a contest. Robert Tennent, honorary secretary of the Nelson Football Club, suggested that Charles Monro endeavour to arrange a match with a side of Wellingtonian’s on his next visit to Wellington. Like their Nelson counterparts, the Wellington men had been playing a variety of Association and Victoria Rules football. Charles Munro responded, and after a scratch game selected a side to meet the Nelsonian’s. The Nelson men were granted a free passage on the Government mail steamer ‘Luna’, but difficulty in the matter of leave had reduced the team to 14 players. Difficulty was also experienced and raising the Wellington side, and when the ground was reached on the important day the complement numbered 12 only, to which was added the driver of the vehicle which conveyed them. Trouble was met when the ground set aside for the match was reached, Mr Laing’s large paddock at Lower Hutt, it being voted too wet for play. 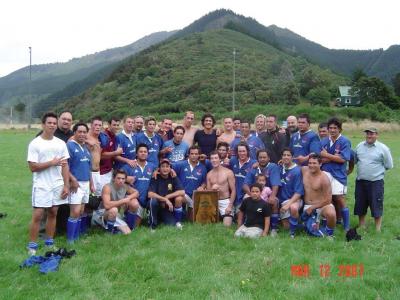 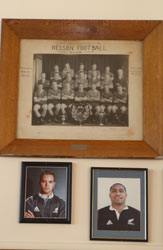 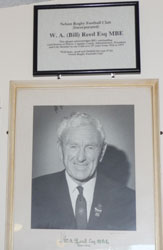